We’ve all been there. We’ve all been that one person who only knows one other person at the party. And god forbid they need a toilet break and leave you with that group of strangers! Alas! Party/ drinking games are a relaxed, fun way to get everyone comfortable around each other at your hen or stag do, so you don’t have to worry about anyone feeling pushed out!

Newcastle is predominantly a student city, and who best to ask for some advice on some pre-night out drinking games before you ‘gan doon tha toon’- that’s hitting the town to you and me!

We’ve all heard of the obvious ones, ring of fire (sure to ensure at least one person doesn’t make it out), beer pong (usually gets almost violently competitive) and Never Have I Ever (but really, don’t you already know everything?).

Here are a few quick and easy drinking games you can learn in five minutes to get you all laughing, and drinking, your way to a fantastic night!

This is completely underrated in the drinking games bible! Basically you pick a letter of the alphabet, and then ask each other questions BUT you cannot answer the question using words that begin with your chosen letter. For example: LETTER F

If you break the rule, you’ve F***ed it- take a shot and pick a new letter!

Create a classic 10×10 Battleship board using your DIY skills and an old pizza box/ marker pens. Then fill up your shot glasses (17 per team) *. Then organise them on the board like you would for Battleships!

Put one of each of these ships on the board, and then take it in turn guessing coordinates! 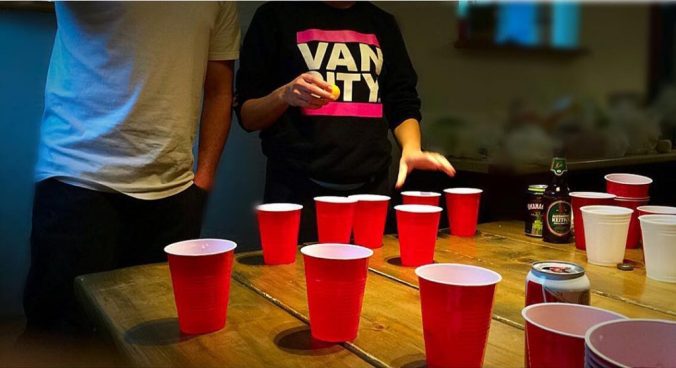 Drink while you think!

This is quite a classic amongst drinking games, that’s funny to play in a big group.

It’s easy as pie. All you do is name a celebrity to start off with, and then the next player names a celebrity who’s first name begins with the letter of the previous celebrities surname!

An optional additional rule is that if you say a celebrity with a name by which the first and surname start with the same letter, the order reverses.

However- when it is your turn you must keep drinking until you come up with a celebrity. It all sounds easy, but wait until the pressure’s on, your halfway through your vodka and lemonade, and everyone’s laughing.

No, no no. Put the clubs away… Admittedly a strange choice of name for a drinking game, however; as drinking games go, this is probably one of the easiest!

Simply lay out some playing cards in a diamond shape, split into teams (or play as individuals), and turn one card from each row over. All you’ve gotta do is make it all the way across, without hitting an ace or a picture card (including jokers).

‘International Drinking Rules’ are always easy to implement too. Basically just come up with some ridiculous rules at the beginning and then they last all night! The forfeit for breaking the rules can be anything from having to dance alone in a group of strangers, to doing a shot! You could make rules such as:

These are just a few examples, but you can go wild! See how many times you can catch each other out!

For more drinkspiration check out this webpage!

And by then you’ll all be fully acquainted (after possibly embarrassing yourself a little bit during these drinking games), a bit buzzed and ready for your wild night out on the toon!

Get the latest newcastle gossip

Want to keep informed of red hot gossip in Newcastle? Subscribe to our Newsletter!